NSS Interlude: It wasn't all work...

New York wasn't all work - Candie and I made time Saturday before the National Stationery Show to go to lunch at the acclaimed 3-Michelin star restaurant Jean Georges. We literally went to Javits in the morning, worked on making the booth pretty, took a cab to lunch, and then walked the mile back to Javits to finish our setup. It was totally worth it. I'll admit to being a closet foodie. I've eaten at my fair share of 1-star and 2-star restaurants, but Jean Georges is my first 3 star restaurant. And their lunch deal was hard to beat - $32 for 2 courses. AMAZING for such a high caliber restaurant. Here's my attempt at food blogging.

The dining room is small, with the focal point being this huge octopus of a light fixture: 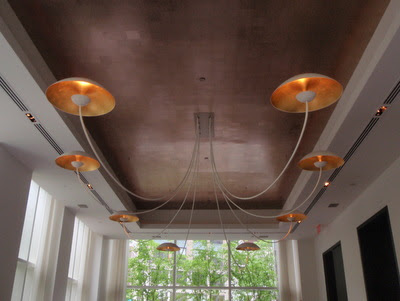 We start with the amuse bouche, which was some sort of pasta bite, a canape, and "to finish" carrot water: 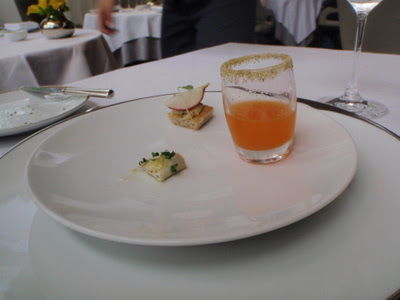 The order to eat the amuse bouche was exactly that. Taken out of order, I think the carrot water's lingering flavor would have been weird with the other tastes. And I will tell you - that little morsel of pasta goodness was a real party in my mouth. I could not stop thinking about it the entire meal, and that's saying something.

Candie ordered the tuna ribbons, which were AMAZING. I'm from Hawaii, I've had lots of raw tuna, so the item didn't interest me so much, but this tuna was AMAZING: 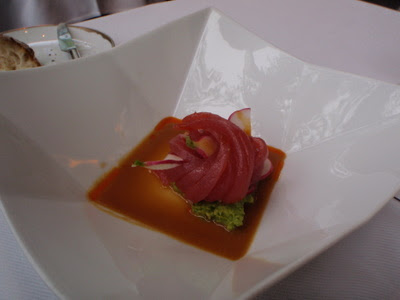 I ordered the soft shell crab - yum - the flavors weren't as assertive as the tuna but still really good: 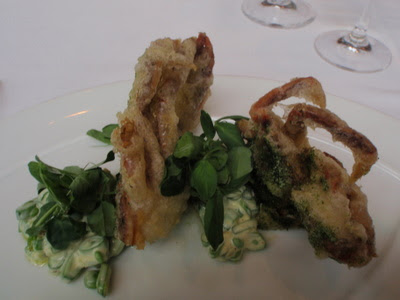 Candie ordered the beef. The meat, she said, was average, but the sauce underneath was mind-blowingly delicious (I can attest, I tried it): 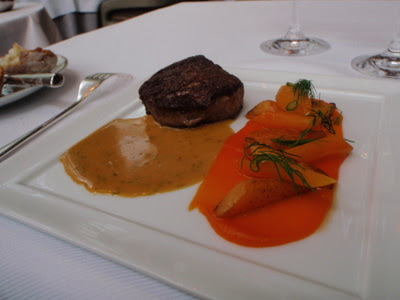 I rarely get the chance to order veal sweetbreads, and since it was on the menu, I had to have it. The sweet chili sauce underneath had just the right amount of heat. I did, however, second guess getting two deep fried items for lunch once the sweetbreads came out. I don't think I thought that one through so much. Whatever. It was delicious delicious delicious: 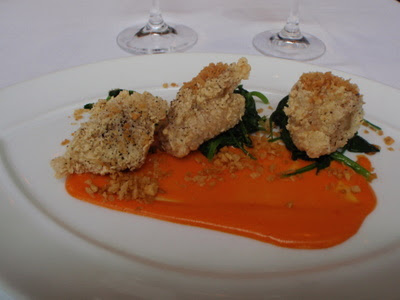 I have a general aversion to fine dining desserts (except at the Dining Room in Pasadena under Chef Strong - best dessert EVER) where I think it's too high concept and not enough OMG OMG OMG YUM, so we waited for another table to get dessert to see their reaction before deciding. It didn't seem orgasmically good (they were just eating it like...eh...dessert) so we decided to skip it. Besides, thanks to Patina in LA, I have a strong strong preference for those fancy marshamallows at the end: 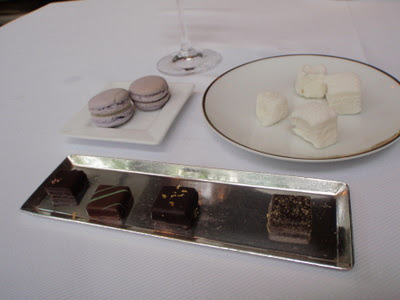 Lavender macarons (a little too sweet and floral for me) rather reinforced my opinion about not getting dessert. Although the marshmallows at Jean Georges were really high caliber. I am a huge fan of gourmet marshmallows!

Hope you enjoyed our little food trek in NYC!
Posted by Tina No comments:

Email ThisBlogThis!Share to TwitterShare to FacebookShare to Pinterest
Labels: Food 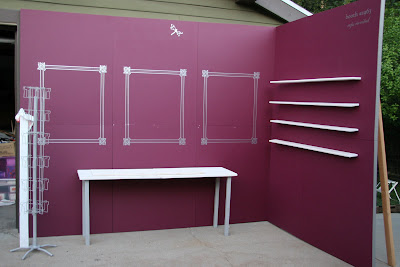 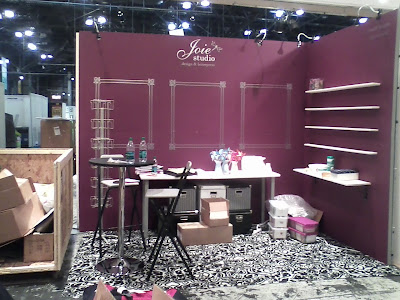 We successfully opened the crate, put up the walls, put down the carpet, build the furniture. Yay! Tomorrow we shall deal with product and Sunday the show begins! Yay! Gonna do some work now. An exhibitor's work is never done until we're done exhibiting!
Posted by Tina No comments: 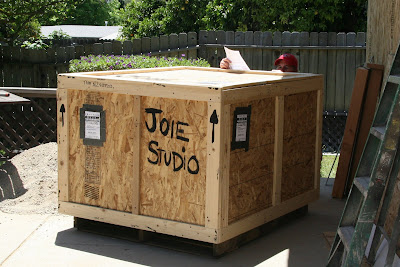 The crate left early last week, and I'm leaving tomorrow. We're on our way to the National Stationery Show! Yay! Wish us luck! Either Candie or I will report back once we get situated in New York City!
Posted by Tina No comments:

Open publication
I'm totally crushing on Invitation Crush's brand new first annual wedding invitation lookbook! I posted it here from the ever awesome Issuu for your viewing pleasure. You can spy two Joie Studio invites and three Toast to Joie invitations, which is totally awesome.

Thank you, Kristen, for putting this together!
Posted by Tina No comments: 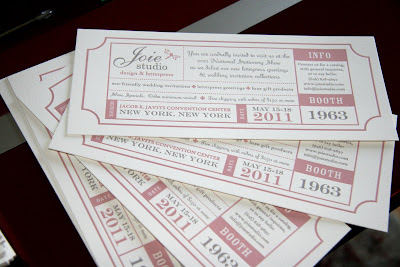 So if you follow Joie Studio on Twitter, you'll maybe guess that all us independent letterpress studio tweeps are just a little obsessed about the National Stationery Show. And one of the aspects we have griped about over the last week or two are the NSS promotional mailers. I didn't want to ruin my own reveal to those that received the mailer (sorry, friends in Canada! next year I'll figure out mail merge a little better to include foreign locations!). My mailer consisted of a letterpress piece and a bunch of postcards. I think the letterpress piece is stunning. So here I am sharing. It's based on two different train ticket designs I've done over the last couple years. I kind of wanted to give people a "Joie Studio ticket" to our booth at the National Stationery Show. I hope you like it! 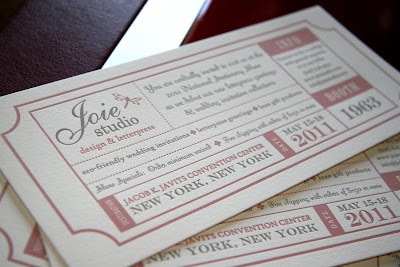 I'll tell you, I wanted the mailer to be a little more extravagant but I'm glad I refrained. The result is simply beautiful letterpress.

If you'll be at the National Stationery Show, please stop by booth #1963 to say hello!
Posted by Tina No comments: 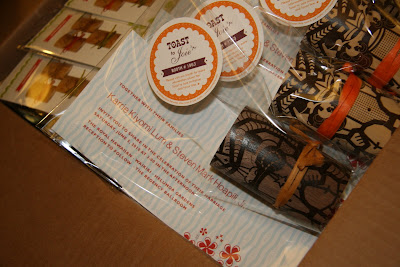 As the preparations for the National Stationery Show continue, Michelle from Shop Toast and I decided to participate in the BizBash gift bag. To show how beautifully the favor and invitation go together, we decided to do a invite/favor set for the gift bag. Michelle & Jeremy sent up 100 tiki aloha wood stumps as well as custom printed labels and I paired them with the matching Toast to Joie Tiki Aloha invitation, packed them into individual bags and sent them on their merry way. There's a sweet little macadamia nut cookie inside of Mr. Tiki, so I hope they enjoy! I have to say, the mailing seemed to quadruple in size as soon as I started individually packaging them. 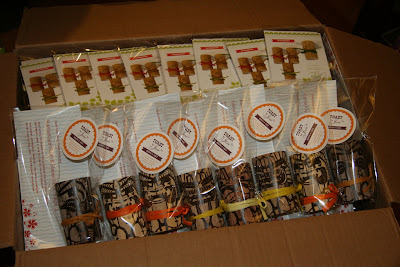 Hope you enjoyed the little sneak peek! Back to work with me! More soon!
Posted by Tina No comments: